Like many women of a century ago, Florence Young lived in the shadow of first her father and then her husband. In the latest in our series exhuming  stories from the Melbourne General Cemetery, Simone Williams goes looking for her beyond the veil. 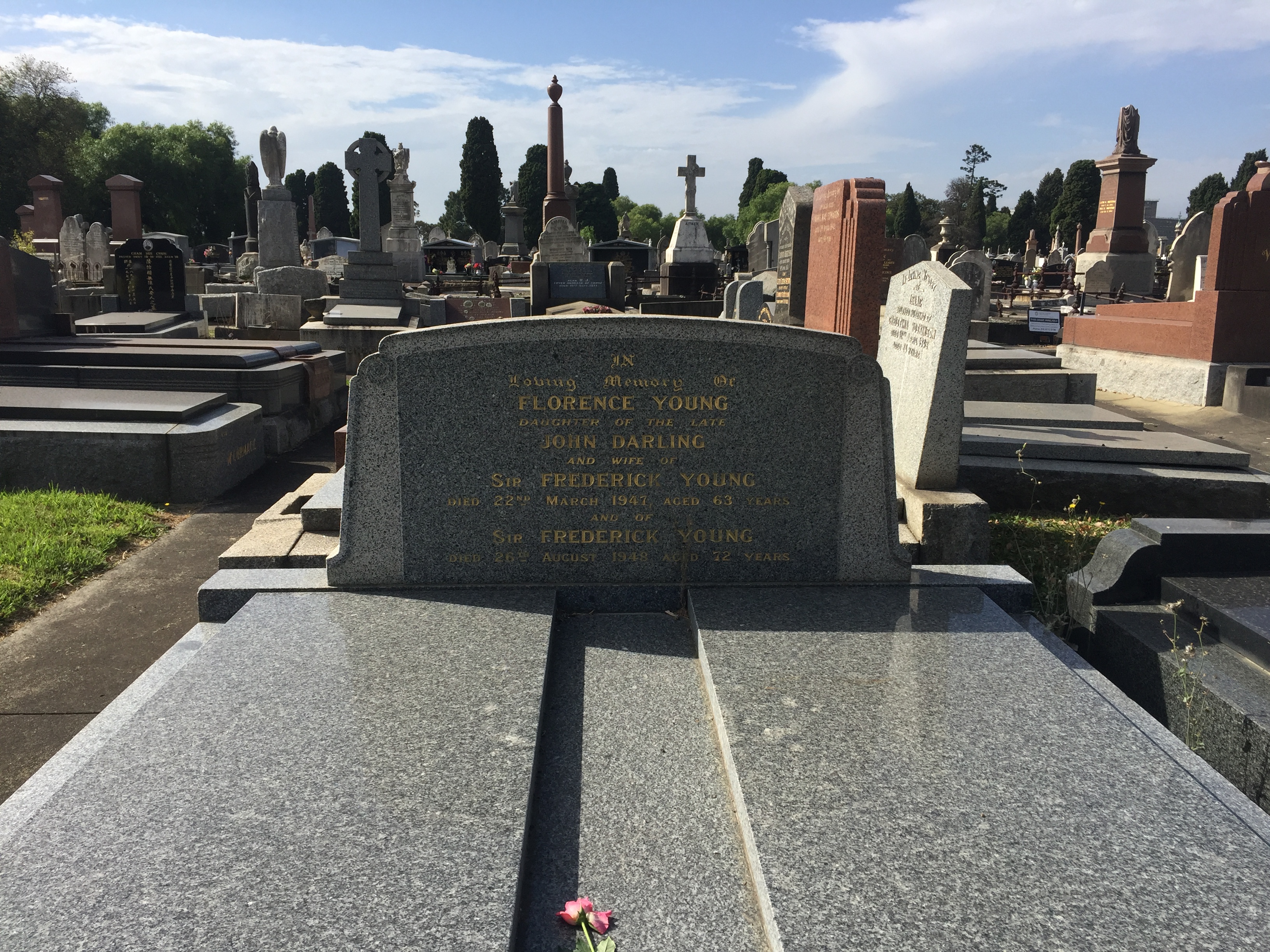 A single, blushing pink fresh rose has been thrown on the granite of the tomb Florence Young shares with her husband in the Melbourne General Cemetery.  The daughter of wheat magnate John Darling, the wife of Sir Frederick Young, she died in 1947 aged 63: a woman of an era and a class defined by men.

But there is so much more to her story. What traces might be found of it? She lived in two centuries, through two world wars, and was a mother and a member of two prominent Australian pastoral families. A woman of Adelaide, Melbourne and Britain, existing in more places than just within the shadow of two leading men. Florence’s life appears charmed: she was born in Adelaide in 1884, and her wedding was covered in detail in Adelaide newspaper The Critic. Despite it being her own wedding, her mention was limited to “the bride looked charming”. The more prominent South Australian female guests were featured, each referred to by their husband’s names – with “Mrs Arthur Gardiner, in black crepe de chine” and “Mrs John Read,” in “duck egg green embroidered voile” both in attendance.

Then in death, Florence is also missing: after Sir Frederick Young died in London in 1948, Melbourne newspaper The Argus ran an AAP report, saying that he left behind a widow, Florence – but she had died the previous year. Various newspapers confused her title – was it Dame or Lady?

Even the scribe of the Sexton’s Book at Melbourne General Cemetery on the day of her burial, March 24, 1947, seemed momentarily distracted, writing ‘‘Sleight’’, the name of the funeral director twice, instead of her last name, which is then squeezed onto the line above. Mistakes around the reporting of women’s deaths were not uncommon – that they would occur even around the death of a well-connected, wealthy, titled family is telling.  There are many headstones in the cemetery where the gilded lettering memoralising a woman is smaller than that of her husband, her father, her brother.

When researching Florence, the advice of Stonnington librarian Janet Buick was to look for her “through her father, husband, brothers”.

Florence was the daughter of John Darling jnr, who, with his father, was involved in the wheat business, in a family the Adelaide Advertiser deemed Australia’s premier wheat exporter in the late 19th century. The Darling family still maintains a presence in the philanthropic community of Melbourne, with descendant Gordon Darling, who died in 2015, initiating a foundation dedicated to funding the visual arts in Australia.

Florence’s son, John Darling Young, was made Lord Lieutenant of Buckinghamshire in 1969 and died, like his father, in Britain. Major Young’s grandchildren, Lucinda and Nigel Sale, now reside on the Isle of Man. And there, the records trail goes cold.

Historian Dr Clare Wright, who has researched extensively on 19th and 20th century Australian women’s stories, has written in The Guardian that “women are central to Australia’s history. Why have we forgotten them?”

Reseaching her 2014 book on women of the goldfields, The Forgotten Rebels of Eureka, she recalls: “I was looking for women, but somehow I came across a file for an Elijah Smith. I should’ve kept going, but I looked inside the folder instead, and it was a detailed account about a robbery at the Bank of Victoria. When I read closer, I realised that the file was for an Eliza Smith, a woman: but someone had changed it to Elijah.”

Wright wonders if it was an administrative error, or even an attempt to erase a woman from history. “Perhaps the person filing couldn’t believe that it was a woman who robbed a bank, and tried to set the record straight. But these mistakes, the carelessness in recording women, means that you have to reclaim women from history, and you can’t assume from the secondary sources that you know the story.

“It comes down to a sense of integrity, and the right to exist in our own right,” says Wright.

As the #TimesUp and #MeToo moment galvanises efforts by women for equal visibility and opportunity with men, the elusiveness of the ghost of Florence Young and so many other women interred in the Melbourne General Cemetery illustrates the invisibility of women in so much of the Australian story. The young and the grieving: On loss, love, laughter and letting the hurt out Common street scene: the utes at the building sites.